Got up late. Missed the chance to go scrumping. Need to get out of Donny, it’s getting heavy in Wheatley. Too many sirens noon and eve, too many ladies of the night trying to earn a crust. There’s the Red Faced Man with his gang, fuelled on Special Brew, marching up and down the street full of underprivileged pomp. We’ve got a syringe littering our path and we need to cut back the privet hedge. It’s getting wild. I can’t stop thinking about the Polish man stabbed on Jubilee Road earlier this week. Today I need to make an effort to drive down to see if there are any flowers on the man’s doorstep.

Wonder if he lived at the same house I in did in 2002? I drive down. There’s a Police van on surveillance. No flowers.

Warren calls Jo and Bracken who invite me to Brotherhood Church, a 90yr old Tolstoy inspired commune in the countryside near Stapleton, a place where ‘Yorkshire’s internal borders nestle together like new-born cats’. They’ve got fruit trees.

I get my shit together. I drive off passing the Red Faced Man and his mates on the prowl. With the wind in my hair and SineFm in my ears I’m hitting the countryside. “Laters RedFace!”

It’s Hip-Hop on the Lockdown Show and Wayne aka Ryallzey has a belly laugh on air that is an instant pick-me-up.

It takes about half an hour to get there. I could have got there quicker, but I miss the humble hand-painted sign and drive passed the entrance three times. Eventually I drive down the track leading to the Brotherhood Church.A rabbit leaps out in front. A pheasant greets me too, makes a change from RedFace and the Ladies of the Night. Phew, I’ve arrived and it’s like I’ve found utopia.

Catching up with Jo and Bracken I realise I’ve worn in appropriate shoes for scrumping. Jo thinks I’m hilarious. It’s raining. I get wet feet.

Bracken climbs a 10ft ladder and I get a massive bag of apples, two jars of honey, tomatoes, raspberries and a cucumber. The air is clean and I feel like an alien visiting an unknown world.

I spend some time with Hilda and Jo before heading back to Wheatley. My brain has been whipped clean and I dream of living a guilt free life off-grid whilst wearing appropriate shoes.

Feeling off kilter today. Still upset about the murder, Isis, UKIP coming to town, the Ebola virus. Need to get a grip. Mental note: spend less time grazing on the internet.

Monday: Back To The Grind

Today I’m nervous. There’s lot of work to do as I’m curating a small display at CAST about the Doncaster Women Against Pit Closures. Over the next few days I’m traveling to the four corners of the borough to pick up items.

Tuesday: Changing the World One Sandwich at a Time.

Wake-up. Check emails whilst in bed. Chase up invoices for unpaid work. Drive to Edlington to pick up their Women Againist Pit Closures’ banner.

Drive to Denaby Main to nanny Buff’s house. Drink tea, eat Fig biscuits, then head to the Miners Welfare to pick up a cooking stove. I don’t know for certain if this was used during the miners strike, but it’s certainly older than me.

Back to my studio. More Facebook and emails. Set the ball in motion to create a hydroponic growing space in the cellar at the Mason’s Arms with John Briggs… get free vegetables in return!

During the evening I meet with Louise Harrison and Joyce Sheppard. Joyce was part of Women Against Pit Closures in 1984, Louise is an activist and member of Unite and is one of the organisers behind the Anti-UKIP demo on Saturday. We talk a lot about Farage, homophobia and racism amongst the Party members. Louise has invited Zita Holbourne to the demo and asks if I’d like to meet her at the Doncaster train station. Wowsa what an honor, of course yes!

I wrote a lot of notes in that meeting. What are the problems? What are the solutions? Answer: people feel powerless, poverty and deprivation are rife. I want to help people feel empowered.

Problems: everyone’s, spending too much on rent, bills, shopping at Tesco’s and online. Local economy is shite. Community is dead.

Solution: I’m boycotting everything. Give me handmade, locally sourced, independent or free. No more lunchtime snacks from Tesco’s, I’m changing the world one sandwich at a time.

Today it’s the production of We’re Not Going Back launches at CAST. The display is up. The production follows the story of three sisters during the miners who set-up a branch of Women Againist Pit Closures. The audience is full of Doncaster folk who experienced the history first hand. 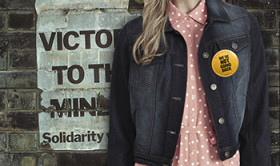 The all female Cast start by evoking scenes from a front room with a brown sofa and a prudish elder sister who works for the coal board. There’s a 70s chick with stilettos and a perm and the youngest sister who adores the Smiths.

The opening song is “Ordinary people can do extraordinary things”. Ain’t that a fact.

The scene set at the fish counter at Kwik Save is heart wrenching. It’s the day after Orgreave. You could cut the atmosphere in the theatre with a knife.

The elder sister describes a scene from the day: men being knocked to the ground by men on horse back whilst she stands with a bag of sandwiches she’s made for all the men, women and kids taking part in the mass picket.

One of the most powerful scenes of the production represented the funeral of the two Goldthorpe Boys, who died whilst out cropping coal. The three actresses sing melancholic lyrics dressed in black huddled under an umbrella.

“Our old men cough up blood, our young men face the dole, what price is coal”.

Thursday: Young Men On The Dole

Got up late for my meeting with Warren at CAST, had a few beers, feeling rough. I pass on some apples from the Brotherhood Church, as Warren gives me the letters stating we’ve launched our company, Horne & Draper. We head down to Church View for meetings.

In town centre I bump into Red Faced Man and his crew who decide to wolf whistle me. I’m popping over to Josie’s Deli to buy a Frittata.
I stop and shout “I’m not a dog!” They didn’t hear me.

Josie’s Deli is one of my favorite independents (illustrations of the deli by print-maker, Graham Firth, feature in this month’s Doncopolitan).

There’s a bit of a scene. Two boyos on bikes chasing another into the Deli. The two boyos outside shout: “Dirty theiving smackhead.”

Smackhead or not it’s two against one, and one who couldn’t have weighed much more than one of Josie’s frittatas at that. Josie’s having none of it. She gives the skinny lad a drink and tells him to calm down. Everyone in the Deli, including me, looks bewildered as the two worlds uncomfortably collide.

I buy my Frittata and feel like a dick. I can’t escape the boyos even when I’m out of Wheatley. I discuss with lady behind the counter how sad it is. I remember saying: “he was somebody’s baby once.”

The frittata is amazing.

I overlay again. Blitz getting ready for work at St John’s Hospice. I listen to Friday mix tape on Radio One and have a great time with staff and patients.

We’ve got a meeting at the Arts Council and it’s time to pack down the show. The meeting is going well, we’re feeling geared up for writing our Phase Two proposal: Building Bohemia.

In the evening I still cant stop thinking about the Polish man killed in my neighbourhood so I decided to Facebook Polish artists Kartina Sandra.

Friday 11:55pm Heya Katrina, how are you? I hope you are well? I live in Wheatley and I have been feeling really sad about the Polish man that was stabbed nearby on Jubilee Road. I don’t know if the polish community has come together? Or where the man’s family is? Even though I didn’t know him, I would really like to do something for his family or housemate who is still living in the house where he was killed? I know it was drugs related but I feel so sad because he worked at DHL like my boyfriend and I also lived on Jubilee road in the past. It just feels close to home and it is so tragic, I just want to do something if it seems appropriate and right? What are you thoughts? Kindest Regards, Rachel

Saturday 8:39am Hi R, u r amazing…such a good and nice person…love u x thank-you for asking….i will find out how we can help…. x

Note to self: Less grazing on the Internet. Wake-up on time. Avoid Red Face. Sort something out for the Polish Man.

Thank you so much to Nat, Louise @ljones2703 @rosieclark_1 Rach M, who have placed orders with me in the last two days. I am SUPER grateful 🙏🙏🙏
“Merge Down” (2022)
Ta dah :)
Happy times, painting beats on a table today instead of the floor :) Brilliant artists and collective vibes @poolartsmcr thanks 🙏 for the invite @annelouise.kershaw and warm welcome, means a lot when you are new to a city 💜💜💜💜
⭐️Thank you to my third customer on @Etsy ⭐️
Follow ARTIST RACHEL HORNE on WordPress.com
Loading Comments...
%d bloggers like this: