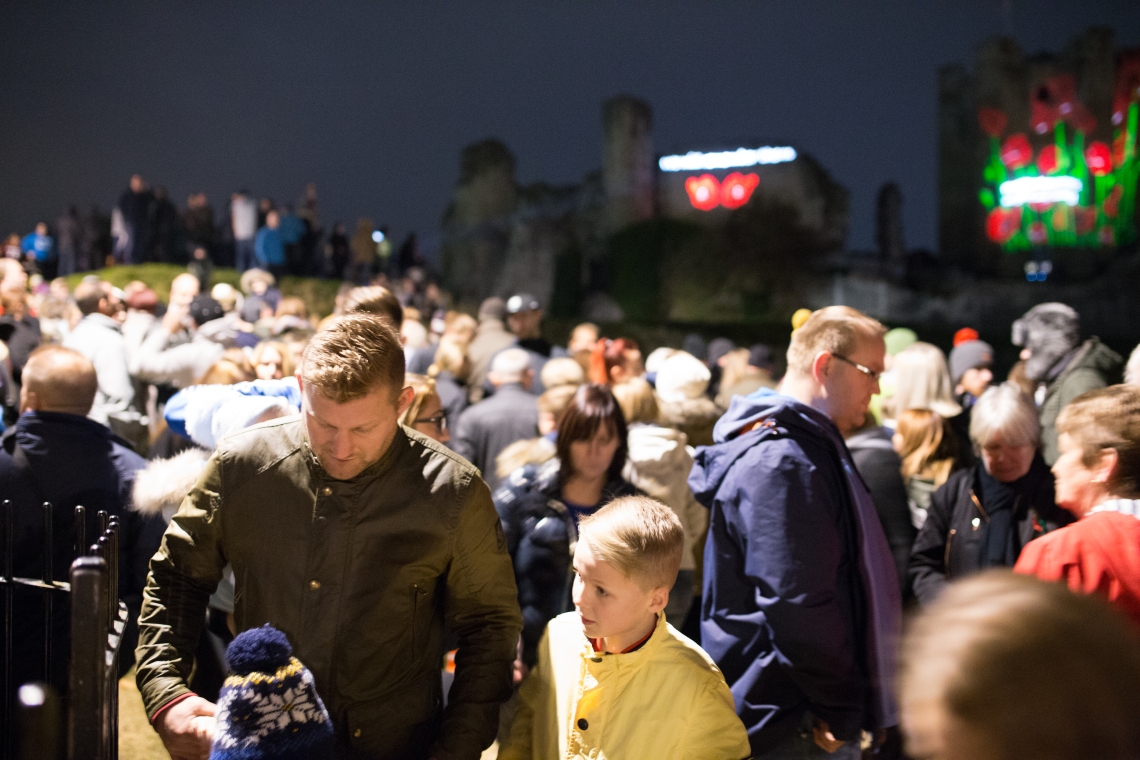 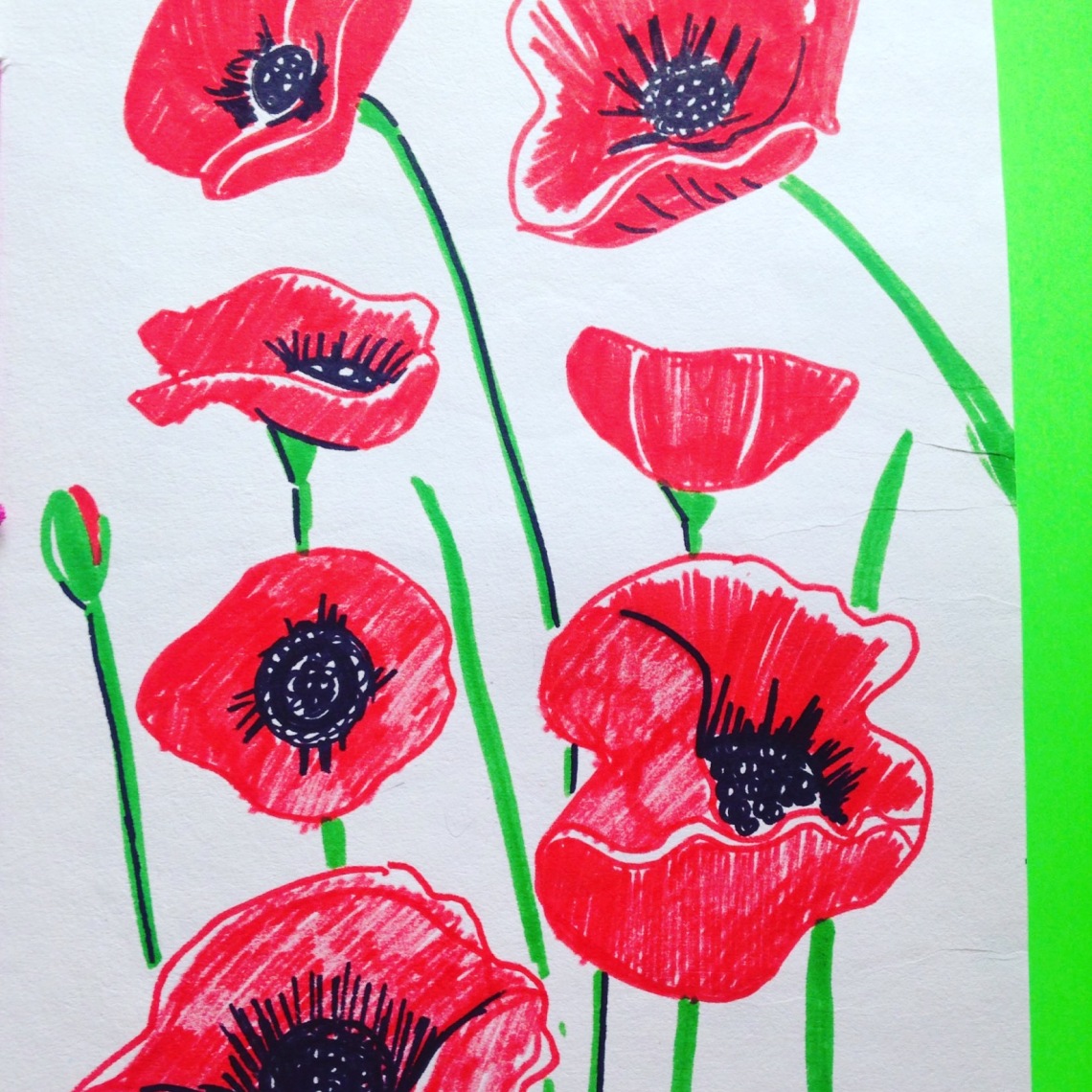 Over 5,000 people came to Conisbrough for the Battle of the Somme remembrance event. ‘Respectful’, ‘memorable’ and ‘moving’ were just some of the comments made. Even the slight discomfort of the rain on Sunday night added to the mood and sombre atmosphere.

There were 60,000 casualties on the first day of the battle and 420,000 British in total. As many as 20 of the men who lost their lives at the Somme have their names on Conisbrough War Memorial. We have remembered them.

This project would not have been possible without those who came and supported it or donated money to our Crowdfunder. In the years after World War I, many memorials were erected by public subscription. It’s therefore possible that nearly 100 year ago people would have contributed to our memorial in a similar way to how you gave to Poppies at the Castle. A modern age, but a common cause that united the generations in remembering our fallen.

Although exact numbers are not yet available at the time of going to press, we estimate that through the generosity of local business and individuals we have raised over £1,500 towards improvements at the Coronation Park. In addition, three local community organisations, the Scouts, Denaby United U7s JFC and St Peter’s Boxing Club, have benefited from programme sales to the tune of around £200 each. The organisers want to thank everyone who took part.

On remembrance Sunday, I witnessed a 97-year-old former soldier who was in France during D-day +4 being presented with his Legion D’honneur medal at the cenotaph in Conisbrough.

I felt really proud of this man. I didn’t know him, had never met him, yet I was proud of him, proud to have witnessed him receiving a medal from the French as a ‘thank you’ for doing what he did to help during the war. It made me think about remembrance and what it means to me.

As an ex-regular and a currently serving member of the army reserve, and having been on various operational tours and lost friends along the way, I try and look at how modern conflicts compare to the great wars of WWI and WWII.

In recent conflicts like Iraq and Afghanistan, the loss of a soldier affects a lot of people. We are often informed through the news and social media. Thinking back to WWI, the only way people found out that someone had died was by letter, and maybe an announcement in church, the main community hub at the time.

Our eras are so vastly different, but the effects are the same. The British loss of life in the 14-year conflict in Afghanistan was 454. This is seen as a massive loss, considering the average force size of 9,000. But compare that to the Battle of the Somme, which happened 100 years ago this year. The loss of life on the first day alone was 19,240. I cannot even imagine that amount of soldiers dying. Some of these would have been from the ‘Pals’ regiments, large groups from the same area or community. Losing just 20 men from one village would have been devastating. The grief it would cause the families and wider community must have been massive. We can only imagine what that would have been like.

What soldiers experience during conflict will affect them for the rest of their lives, from the devastation caused by bombing to the screams of friends and colleagues who are injured. Some never speak of what they have seen or done to save their families from the trauma they have endured.

Being a soldier in a war or conflict, working with others day in day out, and watching each other’s backs while out on patrol creates a ‘band of brothers’ spirit. You will never be able to take that away from a soldier – the friendships and camaraderie that we have all felt. I look around on Remembrance Sunday and see different people with medals from different wars, yet we all share similar thoughts because we all know conflict.

This year we remembered those who paid that ultimate sacrifice with their lives, to thank them for what they endured. We remember those who did survive, who came back to their families, some more affected than others.

We are an old mining community and our community spirit has disappeared since the pits closed. No one really knows their neighbours anymore, but this event was a spark of hope of getting that community spirit back. Poppies at the Castle was an amazing thing to witness. It got everyone out of the house to remember our past and the sacrifices that were made.

@imogensworld_ ❤️
@imogensworld_ what a launch to your first solo exhibition @d31artgallery
Big project launch this weekend! Eek 😱
Big news - since late 2021 I’ve been working with @imogensworld_ on a exhibition of her work @d31artgallery and a few other cute collabs.
How’s ya anxiety levels?
Day 2 of #meetthemaker
Follow ARTIST RACHEL HORNE on WordPress.com
Loading Comments...